The church in Walesby is dedicated to St Edmund and has had many stages of building through its history. The present church buildings date from the Norman period through to the mid 1800’s and is architecturally diverse. A brief description of the church is given below.

St edmund was the king of East Anglia, he was martyred by the Danes Hoxne, Suffolk on 20th November 870. After the conversion of the Danes to Christianity in the 11th century, the martyr’s body was taken by King Cnut to the Abbey of Bury St.Edmunds. The Abbey was built in expiation of the martyrdom and many churches built by the Danes were dedicated to Edmund.

The ending of ‘by’ of the village name indicates a danish settlement and that they probably built a church of wood and plaster, dedicated to their favourite Saint. The church was likely rebuilt in stone by the Normans in the 1100’s and the first recorded priest was named Richard dating from 1179. 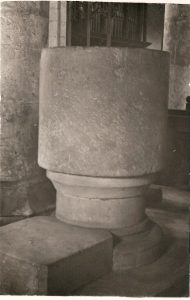 The Nave has four arches on the south side with circular pillars dating from the 14th century. Traces of blue and red colouring show that at one time they were painted, possibly with figures of saints. The three large Perpendicular windows are from the same date. At the entrance to the church  there are 2 more fonts used as flower beds. One on the left is Norman from Haughton Chapel and what is said to be the original Saxon/Danish font is on the right. 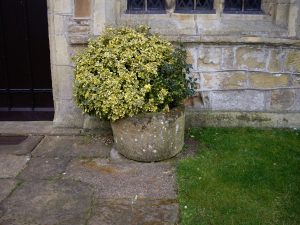 Figures on the bracket opposite the door is of st edmund dating from 1969. It replaced an earlier one that was stolen. The pulpit is from the early 17th century in the reign of King James.

The Chancel is likely Norman with thick walls and splayed windows. They were originally rounded and were later converted to pointed which can be seen when viewed from the church yard.Above the piscina is a small crowned head of St Edmund with remains of medieval colouring. A grotesque face supports the piscina. An amber cupboard in the north wall is thought to be the remains of a leper squint. The east window is in the early English style dating from the 13th century. 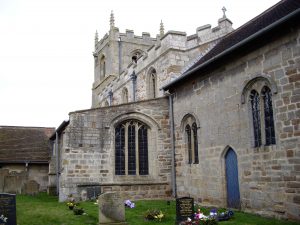 The organ chamber is modern from about 1890, but contains an early English lancet window coming from Haughton Chapel behind the organ. The screen dates from the 19th century whilst the rood figures were added in 1988. 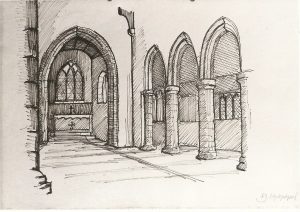 The South Aisle was built in the 14th century and formed the Lady Chapel. In his will of 15th February 1391, Nicolas de Everingham from Laxton Castle, left 100 shillings to buy an alabaster stone to lay on his grave and that of his brother Alexander in the chapel. Nothing now remains of this. A figure of Our Lady & Christ Child stands to the left of the altar and dates from 1982. The bracket it stands on dates from before the reformation of Henry VIII and was done for this very purpose. 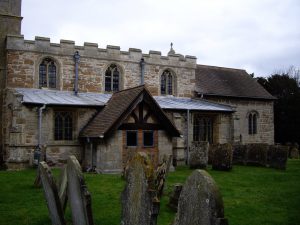 The eight oak benches are early 16th century, notice there are other modern oak pews of the same design. The effigy at the west end of the aisle is of Lady Elizabeth Stanhope and comes from Haughton Chapel. This chapel is now a ruin and was the private chapel of the Stabhopes who were resident at Haughton hall (demolished c.1800). The vicars of Walesby were also the rectors at Haughton from 1257.

The Tower has 2 stages of Perpendicular work from about 1520. There are 3 bells inside, two are modern and the third was set by George Oldfield of Nottingham in 1641. It carries the inscription of “God save the church”. The coat of arms on the south side exterior is probably of John Babington and Saunchia Stanhope, heiress of Haughton Hall. They were married around the time the tower was built. 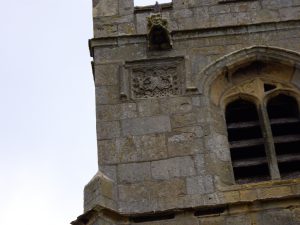